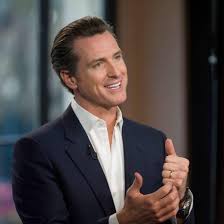 Governor Newsom and the Return of Laboratories of Democracy. This week, a number of states are swearing in new Democratic administrations. California, of course, was Democratic before November’s election, but it’s more so now, with Gavin Newsom taking the oath yesterday to succeed Jerry Brown as governor, and with the share of Democrats in each house of the legislature rising from just under two-thirds to a hegemonic-and-then-some three-quarters.
Newsom’s inaugural address held few surprises, save that when his two-year-old son toddled over and embraced him mid-speech. But the health insurance policies Newsom laid out in his speech and subsequent executive orders provide a good model for how a state can set a template for a policy shift on the federal level, should the Democrats capture the White House and the Senate in 2020.


At the outset of his gubernatorial campaign, Newsom had pledged his support for single payer health insurance in California. Rather than announce he would submit a single payer proposal to the Legislature, however, he promised in his inaugural address to petition President Trump and Congress to redirect federal funds (for, say, Medicare) to the state so it could establish a single payer system—a necessary prerequisite for putting the new system in place. In a sense, that fulfills Newsom’s pledge without his having to deal with the very complicated and politically difficult task of formulating a single payer plan capable of legislative enactment and, once the tax hikes are factored in, public support.
In his speech, Newsom also unveiled expansions to the state’s Medicaid program. California already covered (on its own dime, not the feds’) undocumented immigrants up to the age of 18; Newsom proposed to raise the age threshold to 25. He also signed an executive order yesterday empowering the state’s Department of Health Care Services to negotiate all drug prices for the state’s 14 million Medicaid recipients. Until now, a range of state and local agencies bargained separately with the drug companies. Giving one agency the power to negotiate prices for 14 million people will create a bargaining agency with more clout by far than any currently in existence anywhere in the nation. With congressional Democrats committed to doing the same on the national level (though the chances of such legislation passing in the Republican controlled Senate are slim), Newsom’s order enables California to show just how effective and far-reaching such a process can be in reducing drug prices.
Newsom also announced the state would increase the income threshold for Californians enrolled under the Affordable Care Act—up to $72.840 for individuals and $150,600 for families of four. To fund this increase, he announced he’d ask the legislature to re-impose the individual mandate requiring all Californians to have insurance or pay a penalty if they don’t. The mandate had been a part of the original ACA, but the Republican Congress revoked it, with President Trump’s signature, in 2017.
Which raises an interesting, if probably academic, question. Last month, a Republican-appointed federal judge in Texas struck down the ACA because the Supreme Court had upheld it due to Chief Justice John Roberts’ ruling that the mandate was a tax, and hence, constitutional. Minus the mandate, the Texas judge ruled, there was no longer a constitutional basis to uphold the law, which he struck down in its entirety.
Most legal authorities who’ve weighed in have written that the judge’s decision is wrong, that the act is clearly constitutional with or without the mandate, and that the ruling is very likely to be reversed on appeal. That’s why I said this is likely an academic discussion. If it’s not, however—if the ACA depends on the existence of a mandate—would the program be upheld in California or in any other blue states that follow Newsom’s lead, even if it is scrapped in states without a mandate?
In any event, Newsom has already pushed the envelope for progressive change, renewing Louis Brandeis’s faith in the potential of states to be democracy’s laboratories. ~ HAROLD MEYERSON
If you are not receiving this newsletter straight to your inbox, please click here.