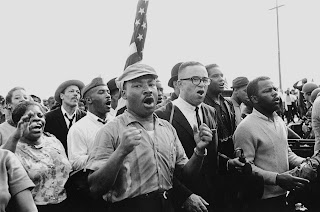 Virtually every Democratic Party politician, black or white, claims the legacy of Martin Luther King Jr.
Conveniently forgotten is the fact that in the final years of his life, before his assassination in 1968, King broke with Democratic President Lyndon Johnson over the Vietnam War and the administration’s failure to enforce civil rights legislation in the South. That’s something no Democrats of national stature have been willing to do today.
While the reforms advocated by King for most of his life were mild compared to the demands of the more radical black nationalists, they were nevertheless condemned by the same Democrats who have since tried to turn King into a heroic icon and a symbol of black accommodation to the system.
In order to understand King’s eventual shift to the left, it’s necessary to look at the class struggles that underpinned the civil rights movement and the nature of King’s organization, the Southern Christian Leadership Conference (SCLC).