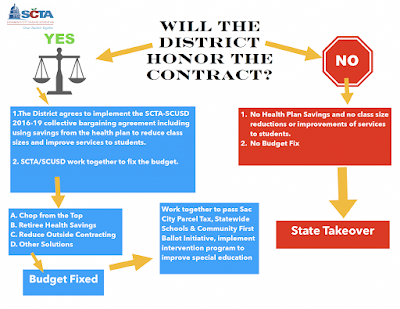 The president of the Sacramento City Unified School District school board, Jessie Ryan, called for a “ceasefire” following the recent strike by Sac City Unified educators, saying “together we can solve this fiscal crisis and unite to save our schools with smart solutions.”
The Sacramento City Teachers Association (SCTA) couldn’t agree more. We know a state takeover is entirely avoidable.But the district’s leadership hasn’t offered any realistic, “smart solutions.”
Sticking one’s head in the sand and unlawfully avoiding contractual obligations is not a solution. Neither is refusing to make necessary cuts to a bloated bureaucracy. The district needs to do better.
SCTA has proposed a comprehensive budget plan that boosts services to the district’s students. Our plan avoids a state takeover.
The district needs to honor its contracts and obey the law. Superintendent Jorge Aguilar and Board President Ryan’s refusal to honor the SCUSD’s contract with teachers resulted in the transfer of more than $11 million in taxpayer dollars to the for-profit health insurance giant Health Net.

Those funds should have been used to lower class sizes and increase the number of school nurses, psychologists and other support staff serving students – as outlined in contract signed 17 months ago. Aguilar and Ryan are about to repeat this same giveaway this year, with a loss to the district of as much as $16 million dollars.
Rather than keep their promises, Aguilar and Ryan have employed a divisive and unlawful strategy of declaring the contract null and void. Their backtracking precipitated the unfair labor practices strike on April 11 – as part of a larger effort to cover up their fiscal mismanagement –and may result in another strike on May 22.
In stark contrast, SCTA’s budget proposal keeps promises to students, fixes the budget fiasco AND eliminates the $34 million deficit.
First, it recognizes that SCUSD overfunds retiree health benefits by $8.5 million per year. The district budgets $25 million per year for retiree health, but expenses are only $16.5 million. Redirecting that $8.5 million over three years creates a savings of $25.5 million.
Second, it chops from the top. SCUSD can save a minimum $16 million per year by trimming the district’s bureaucratic bloat. This can be done through a combination of wage and staffing cuts at the Serna Center, the district’s front office.
Mr. Aguilar recently told the CBS Evening News that everything was on the table, including his own salary, which exceeds the governor of California’s paycheck by 58 percent. A 25 percent reduction in the pay of administrators who make over $125,000 would save $4.2 million that could be better spent in the classroom.
Since 2014, even as student enrollment has declined, the number of SCUSD administrators has surged from 166 to 274 – a 65 percent increase. Cutting staff and salaries achieves nearly $16 million in savings, with a net decrease of $48 million over three years.
Finally, the district must make targeted cuts of $5 million a year to its $75 million in contracts with outside consultants and service providers.
Additional ongoing cuts might include delaying unused vacation buyouts to administrators and capping legal fees to outside law firms. These alone could save over $4 million per year.
SCTA’s proposal conservatively reduces the district’s deficit by more than $60 million – nearly double the $34 million deficit. SCTA has reviewed these proposals with staff from the state’s Fiscal Crisis Management Assistance Team and have been assured by state authorities that these projections are both fiscally sound and viable.
Our proposal avoids a state takeover, protects vital programs and allows Aguilar and Ryan to keep their promises and obey the law.
Board president Ryan is correct. It’s time for smart solutions and responsible choices. We shouldn’t delay. Shirking obligations and pursuing unlawful actions will only lead to a state takeover.
David Fisher is a second grade teacher and the president of SCTA. Nikki Milevsky is a school psychologist and the SCTA’s first vice president. They can be reached at scta@saccityta.com.
Published in the Sacramento Bee

Ed Note: The SCUSD budget crisis is not caused by teachers.  It is caused by California under funding its schools since the 1980's.
https://choosingdemocracy.blogspot.com/2019/04/the-schools-are-underfunded.html
Posted by Duane Campbell at 1:41:00 PM