There's No Excuse for Mistreating Children at the Border


Here’s What To Do About It.
Speak up. Donate. Educate yourself. Vote.
By The Editorial Board.  New York Times.

The editorial board represents the opinions of the board, its editor and the publisher. It is separate from the newsroom and the Op-Ed section. 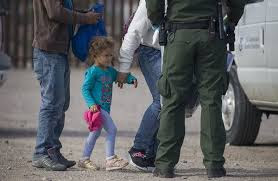 A young child among the migrants being processed by border patrol agents after crossing into the United States to seek asylum.CreditJoe Raedle/Getty Images

From his promise of a “beautiful wall” to his false alarms about caravans of alien marauders at the gate, President Trump has exploited immigration as his marquee issue. He is right, there is a crisis: Not of undocumented immigrants or thousands seeking refuge, as the president would have it, but a crisis of American values, a crisis of America’s premier tradition as a welcoming and humane haven. A crisis Mr. Trump has created, even as Congress has fueled it.

But, by his divisive, incoherent and barbaric policies, Mr. Trump has only made agreeing on an approach to immigration in the United States far more difficult. He has done so by systematically creating a false narrative of immigrants as job-stealing criminals, by insisting that there is a crisis of illegal immigration where there is none and, most maliciously, by dreaming up schemes to torment these people in the perverse notion that this would deter others from trying to reach the United States.

The most appalling of these has been the separation of children from their parents and detaining them in conditions no child anywhere should suffer, and certainly not children in the care of the American government. At a recent hearing before a federal appeals court in San Francisco, judges were stunned by the administration’s arguments that children sleeping on concrete floors in frigid, overcrowded cells, without soap or toothbrushes, were being kept in “safe and sanitary” facilities, as required by law. “You’re really going to stand up and tell us that being able to sleep isn’t a question of safe and sanitary conditions?” asked one judge.

Mr. Trump’s latest display of cruel bluster was the announcement, and then the delay, of nationwide raids to deport undocumented families. In fact, deporting immigrants who have exhausted their legal claims is not uncommon — President Obama, remember, was often referred to by immigration groups as “deporter in chief” — and the targets of these raids are not random. But Mr. Trump sought to use the operation to strut before his base and extract concessions from Democrats, and spread panic through immigrant communities. His announcement delayed action by Congress and made the operation that much more difficult by warning those targeted for deportation. Then he tweeted that he was delaying the raids for two weeks.

The United States urgently needs an immigration policy that combines border security, justice and humanity. President Trump has promoted policies that undermine all these goals, and Congress has failed to agree on a coherent vision. You can help turn that around. Here’s how:

Call Congress, your mayor and local representatives. Contact your representative and tell them you want upcoming ICE raids to be called off and detention conditions improved. The legal defense nonprofit Raices has provided a template and an online form that you can use to email your congressional representatives. You can also reach out to your local representatives to ask that they initiate plans to help immigrant communities that are affected by the raids. This official government website has provided links to finding your city, county and town officials.