You Put Children in Cages for a Fascist President


Donald Trump’s acting deputy secretary of homeland security was called “the son of immigrant grandparents who cages children for a fascist president” on Wednesday night, by a man who forced him to leave a Capitol Hill bar on Thanksgiving eve.

That man was Martin O’Malley, former Baltimore mayor, governor of Maryland and candidate for the Democratic presidential nomination in 2016.
It was the latest in a string of incidents in which angry opponents of Trump have confronted members of his administration in public.
In June 2018, then White House press secretary Sarah Sanders was famously asked to leave a restaurant in Virginia. Senior adviser Stephen Miller, the force behind Trump’s hardline immigration policies, has been confronted numerous times.

Such incidents have led to debate about the need for civility in US public life – particularly after Trump himself was booed at a World Series game in Washington in October. The first lady, Melania Trump, was booed in Baltimore on Tuesday, when she delivered remarks at a conference on the opioid epidemic.


In messages sent to the Washington Post after the Wednesday night incident at the Dubliner bar, O’Malley was unrepentant.


A Twitter user who met O’Malley at the pub first reported the incident, writing: “Martin O’Malley just drove Ken Cuccinelli out of the Dubliner in DC [with] a passion-laced and shame-invoking tirade on behalf of immigrant refugee children!!!”firings
Siobhan Houton Arnold later told the Post: “O’Malley was shouting. I don’t think Cuccinelli was responding. I think he’s like, ‘Time to go. Just got here and I’m leaving.’ He pretty much retreated.”
O’Malley told the Post he had not shouted, but had raised his voice to be heard in a busy bar as he gathered with fellow members of his class at Gonzaga, a Catholic high school in Washington from which Cuccinelli also graduated.
He wanted to talk about Trump immigration policy which has led to family separations at the southern border and controversy over the conditions in which migrants of all ages are held.
Read more »
Posted by Duane Campbell at 11:22:00 AM No comments:

If you live in California, you have almost certainly encountered homelessness. It’s the most visible symptom of the state’s vast economic inequality and is often the top concern among Californians from across the political spectrum.

Maybe your children have asked you why there are people who live on the streets, or you’ve read up on how the state’s lack of affordable housing is driving the crisis and the state or local policy changes that experts say will be necessary to make a dent in the problem.

Still, confronting the daily reality that hundreds of thousands of Californians don’t have stable places to sleep can feel overwhelming.

When we asked what readers wanted to know about the ways inequality plays out in the Golden State, many asked how they could help their homeless neighbors.

[Our national editor, Marc Lacey, explains our new effort to involve readers directly in our coverage.]

So we reached out to the people who best know what’s helpful and what’s not: those who have experienced homelessness themselves.

We heard from dozens of Californians, and nearly everyone who shared advice echoed the same basic request: Treat people you come across with dignity and respect. Don’t avoid eye contact, but do avoid making assumptions.

“When I was young, I judged those drinking or using on the sidewalks late at night,” wrote Joh Rathbun, of Santa Cruz. “I now know that a tall boy or two is much cheaper than rent.”

No gesture of good will is too insignificant, she added: “A small nod to recognize someone’s humanity can be monumental.”

Some said that offering a hot shower or a safe place to camp or park overnight helped ease their burden for a little while.
But some also said it’s O.K. to set boundaries for yourself.

Email ThisBlogThis!Share to TwitterShare to FacebookShare to Pinterest
Labels: homeless

Sanders' Green New Deal: A Realistic Response to the Emergency That Will Define Our Lifetimes

Sanders' Green New Deal: A Realistic Response to the Emergency That Will Define Our Lifetimes
Posted by Duane Campbell at 8:12:00 PM No comments:

"This Is a Military Coup”: Bolivian President Evo Morales Resigns After ...

We are going into a critical election year. The working class of Chicago just flexed their muscles with a massive strike against their neoliberal Democratic mayor. And in Washington the impeachment hearings continue, prompting an aggressive backlash by the Republicans.
As civil war hashtags are trending on social media and Trump is backed into a corner, desperate to find a distraction, let’s remember the wise words of legendary American socialist Eugene Victor Debs at his Canton, Ohio speech against World War One. His birthday was November 5th. War, he said, is a racket, unless it’s the class war:
“That is war in a nutshell. The master class has always declared the wars; the subject class has always fought the battles. The master class has had all to gain and nothing to lose, while the subject class has had nothing to gain and all to lose — especially their lives.
“They have always taught and trained you to believe it to be your patriotic duty to go to war and to have yourselves slaughtered at their command. But in all the history of the world you, the people, have never had a voice in declaring war, and strange as it certainly appears, no war by any nation in any age has ever been declared by the people.
“And here let me emphasize the fact — and it cannot be repeated too often — that the working class who fight all the battles, the working class who make the supreme sacrifices, the working class who freely shed their blood and furnish the corpses, have never yet had a voice in either declaring war or making peace. It is the ruling class that invariably does both. They alone declare war and they alone make peace.
Yours not to reason why;
Yours but to do and die.
That is their motto and we object on the part of the awakening workers of this nation.
“If war is right let it be declared by the people. You who have your lives to lose, you certainly above all others have the right to decide the momentous issue of war or peace.”
Posted by Duane Campbell at 3:55:00 PM No comments: 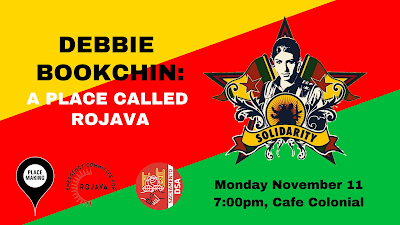 Barack Obama has a message about being politically woke 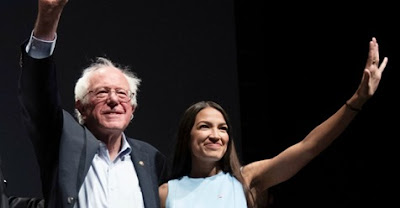 Last February I was working as a waitress in downtown Manhattan. I worked shoulder to shoulder with undocumented workers who often worked harder and hardest for the least amount of money.

I didn't have health care. I wasn't being paid a living wage. And I didn't think that I deserved any of those things because that is the script that we tell working people here and all over this country.

It wasn't until I heard of Bernie Sanders that I began to question and assert and recognize my inherent value as a human being that deserves healthcare, housing, education, and a living wage.

Now I am in Congress — and I'm proud to say that the only reason that I had any hope in launching a long shot campaign for Congress is because Bernie Sanders proved that you can run a grassroots campaign and win in an America where we almost thought it was impossible.

Last month, I stood with more than 25,000 people in Queens, New York City, where I endorsed Bernie Sanders for president. And now I am asking you to add your name to say you support Bernie too.

Please add your name to say that you also endorse Bernie Sanders to be our next president, and to build the working class movement that will make that happen.

When I was a baby, my family relied on Planned Parenthood for prenatal care, and back then Bernie Sanders spoke for me.

When I was growing up and education was being gutted for kids in the “wrong” zip code, Bernie Sanders spoke for us.

When I was a waitress and it was time for me to graduate college with student debt, Bernie Sanders was one of the only ones that said no person should be graduating with life-crushing debt at the start of their lives.

Bernie Sanders did not do these things because they were popular — and that’s what we need to remember. He did this, and he fought for these aims and these ends when they came at the highest political cost in America. No one wanted to question this system. And in 2016 he fundamentally changed politics in America.

What we need to do in this country is to organize a positive and welcoming mass movement that is centered on the working class, the poor, and the middle class. One that is actively anti-racist and that is rooted in principles of universality of cooperation.

We need a United States that really, truly and authentically is operated, owned and decided by working people in this country.

Our movement is multi-racial, multi-gendered, multi-generational and multi-geographic. We have to come together not by ignoring our differences, but by listening to them, prioritizing them, and understanding injustice.

The movement that we are building together is one that can not only elect Bernie Sanders, but that can truly transform our country to work for everybody. That is why I am asking you today:

Please add your name to mine and say that you support Bernie Sanders as our next president. Together we can build this movement to transform our country.

Thank you for all you do.