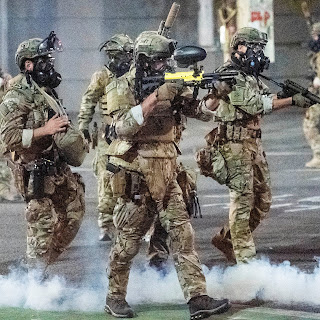 If You’re Not Scared About Fascism in the U.S., You Should Be

The month after Donald Trump’s inauguration, the Yale historian Timothy Snyder published the best-selling book “On Tyranny: Twenty Lessons From the Twentieth Century.” It was part of a small flood of titles meant to help Americans find their bearings as the new president laid siege to liberal democracy.
One of Snyder’s lessons was, “Be wary of paramilitaries.” He wrote, “When the pro-leader paramilitary and the official police and military intermingle, the end has come.” In 2017, the idea of unidentified agents in camouflage snatching leftists off the streets without warrants might have seemed like a febrile Resistance fantasy. Now it’s happening.
According to a lawsuit filed by Oregon’s attorney general, Ellen Rosenblum, on Friday, federal agents “have been using unmarked vehicles to drive around downtown Portland, detain protesters, and place them into the officers’ unmarked vehicles” since at least last Tuesday. The protesters are neither arrested nor told why they’re being held.
There’s no way to know the affiliation of all the agents — they’ve been wearing military fatigues with patches that just say “Police” — but The Times reported that some of them are part of a specialized Border Patrol group “that normally is tasked with investigating drug smuggling organizations.”
The Trump administration has announced that it intends to send a similar force to other cities; on Monday, The Chicago Tribune reported on plans to deploy about 150 federal agents to Chicago. “I don’t need invitations by the state,” Chad Wolf, acting secretary of the Department of Homeland Security, said on Fox News Monday, adding, “We’re going to do that whether they like us there or not.”
PORTLAND PROTESTS
Photos of clashes with federal forces
In Portland, we see what such an occupation looks like. Oregon Public Broadcasting reported on 29-year-old Mark Pettibone, who early last Wednesday was grabbed off the street by unidentified men, hustled into an unmarked minivan and taken to a holding cell in the federal courthouse. He was eventually released without learning who had abducted him.
A federal agent shot 26-year-old Donavan La Bella in the head with an impact munition; he was hospitalized and needed reconstructive surgery. In a widely circulated video, a 53-year-old Navy veteran was pepper sprayed and beaten after approaching federal agents to ask them about their oaths to the Constitution, leaving him with two broken bones.

There’s something particularly terrifying in the use of Border Patrol agents against American dissidents. After the attack on protesters near the White House last month, the military pushed back on Trump’s attempts to turn it against the citizenry. Police officers in many cities are willing to brutalize demonstrators, but they’re under local control. U.S. Customs and Border Protection, however, is under federal authority, has leadership that’s fanatically devoted to Trump and is saturated with far-right politics.
“It doesn’t surprise me that Donald Trump picked C.B.P. to be the ones to go over to Portland and do this,” Representative Joaquin Castro, Democrat of Texas, told me. “It has been a very problematic agency in terms of respecting human rights and in terms of respecting the law.”
It is true that C.B.P. is not an extragovernmental militia, and so might not fit precisely into Snyder’s “On Tyranny” schema. But when I spoke to Snyder on Monday, he suggested the distinction isn’t that significant. “The state is allowed to use force, but the state is allowed to use force according to rules,” he said. These agents, operating outside their normal roles, are by all appearances behaving lawlessly.
Snyder pointed out that the history of autocracy offers several examples of border agents being used against regime enemies.
“This is a classic way that violence happens in authoritarian regimes, whether it’s Franco’s Spain or whether it’s the Russian Empire,” said Snyder. “The people who are getting used to committing violence on the border are then brought in to commit violence against people in the interior.”

Fascist — people like to use the word to describe any politician they don’t like on both sides of the aisle. Now it might seem like an exaggeration to call Trump a fascist. I mean, he’s not calling for a genocide or imprisoning his own people without due process. But I want you to reflect for a moment on his words, on his political tactics — on his rhetoric, if you will. I’ve devoted the last decade of my life to studying fascist propaganda. And if you use history and philosophy as a guide, it’s easy to see parallels between Trump’s words and those of the most reviled fascists in history. That scares me. And it should scare you, too. [music] We’ve flirted with fascism before. “They wore Hitler’s uniforms, but they wrapped themselves in the American flag.” But how are we seeing these images echoed in 21st-century America? “Build that wall!” Well, the formula for fascism is surprisingly simple. And it gets repeated a lot. Italy and Germany, of course, but fascist movements are on the rise today in India, Myanmar, Hungary, Turkey, and right here in the United States. No matter where they come from, fascist politicians everywhere are cut from the same cloth. Fascism first takes root when politicians conjure up a faith in a mythic past — a past supposedly destroyed by liberals, feminists and immigrants. For Mussolini, it was the Roman Empire. For Erdogan in Turkey, it’s the Ottomans. Hungary’s Viktor Orban rewrote the Constitution with the goal of “making Hungary great again” — a line that sounded great to someone. “Did you ever hear this before? ‘Make America great again.’” [cheering and applause] Fascists create an overwhelming sense of nostalgia for a past that is racially pure, traditional and patriarchal. From Mussolini to Hitler to Erdogan, fascist leaders position themselves as father figures and strongmen. “I want to thank you for getting this country moving.” “I can’t thank you enough for the privilege that you’ve given me.” “Greatest privilege of my life.” As long as he — and yes, it’s always a he — remains in power, everything is possible. Without him the whole system collapses. “I’ll tell you what. If I ever got impeached, I think the market would crash. I think everybody would be very poor.” Once you’ve got your mythic past, you need the next ingredient. Division, whether it’s between Germans and Jews, Hindus and Muslims, citizens and foreigners, whites and blacks, fascists succeed by turning groups against each other. The Nazis said Jews had no value because they supposedly did no mental or physical work. In Myanmar, the Rohingya have been denounced as rapists and criminals, a line which will sound familiar to many Mexicans. “They’re bringing drugs. They’re bringing crime. They’re rapists. And some, I assume, are good people.” When you divide, it’s easier to control. Once fascism has taken root, it spreads through propaganda — and, in particular, a kind of anti-intellectualism. “They can make anything bad, because they are the fake, fake, disgusting news.” Fascists attack the truth because truth is central to a free democracy. “It’s somebody’s version of the truth, not the truth.” “Truth is truth. I don’t mean to go — “ “No, it isn’t truth! Truth isn’t truth!” This environment creates a Petri dish for conspiracy theories. Have you seen this symbol at a Trump rally recently? It’s a sign for a popular online conspiracy theory that the “deep state” is working to bring down Trump. It’s not a million miles away from Viktor Orban’s wild campaigns against a global Jewish conspiracy. With the truth under attack and lies running wild, no one can agree on what’s true anymore. And fascists love it when that happens. You might think I’m trying to frighten you by making these parallels. And do you know what? I am. My parents survived the Holocaust. And my grandmother, in her memoir, wrote about how Jews in Germany didn’t see the Nazi threat until it was too late. “In 1937, we were still able to leave the country,” she wrote. “We could still live in our homes. We could still worship in our temples. We were in a ghetto. But the majority of our people were still alive.” I want you to be scared, because if you’re not worried about encroaching fascism in America, before long, it will start to feel normal. And when that happens, we’re all in trouble.
5:02If You’re Not Scared About Fascism in the U.S., You Should Be


When fascism starts to feel normal, we’re all in trouble.
Castro worries that since the agents are unidentified, far-right groups could easily masquerade as them to go after their enemies on the left. “It becomes more likely the more that this tactic is used,” he said. “I think it’s unconstitutional and dangerous and heading towards fascism.”

On Friday, the House speaker, Nancy Pelosi, tweeted about what’s happening in Portland: “Trump and his storm troopers must be stopped.” She didn’t mention what Congress plans to do to stop them, but the House will soon vote on a homeland security appropriations bill. People outraged about the administration’s police-state tactics should demand, at a minimum, that Congress hold up the department’s funding until those tactics are halted.
Through the Trump years, there’s been a debate about whether the president’s authoritarianism is tempered by his incompetence. Those who think concern about fascism is overblown can cite several instances when the administration has been beaten back after overreaching. But all too often the White House has persevered, deforming American life until what once seemed like worst-case scenarios become the status quo.
Trump has already established that his allies, like Michael Flynn and Roger Stone, are above the law. What happens now will tell us how many of us are below it.